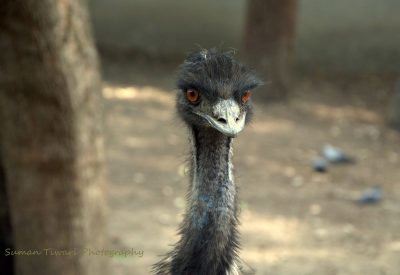 Agriculture is an ocean which includes various number of crops, birds and fish farming. We find many new introductions every year. These days Stevia plant farming and Emu bird keeping are becoming popular in countries like India and Nepal. In this article we will focus extensively on EMU bird farming in India and neighboring countries.

Emu is the second largest non-flying bird which originates from Australia and is a national bird of the country. Aboriginal Australians (a tribe in Australia) started Emu bird farming for the first time and it was done for their egg and meat. Emu meat is considered low in cholesterol, high in iron, rich in protein and Vitamin C and has a taste similar to lean beef. Now-a-days Emu meat, eggs and products made from EMU like Emu’s oil, leather, soap and feathers are widely acceptable in countries like Australia, New Zealand, USA and Asian country like China. Emu’s feather is in huge demand these days. They are being used as a feather duster, feather pad, fans, boas, masks, finishing metals prior to painting, weather-proof apparels, pillows, blazers, sweaters, jewelry and craft items. Emu stores fat at their back and this is the area from where Emu’s oil is extracted. Since, Emu’s oil contains pain- relieving oleic acid, doctors often recommend Emu oil massage to patient suffering from arthritis. Emu’s Oil also helps in preventing stretch marks, wrinkles and fine lines caused due to aging. Emu oil costs around Rs. 5000 ($ 85) per kilograms. 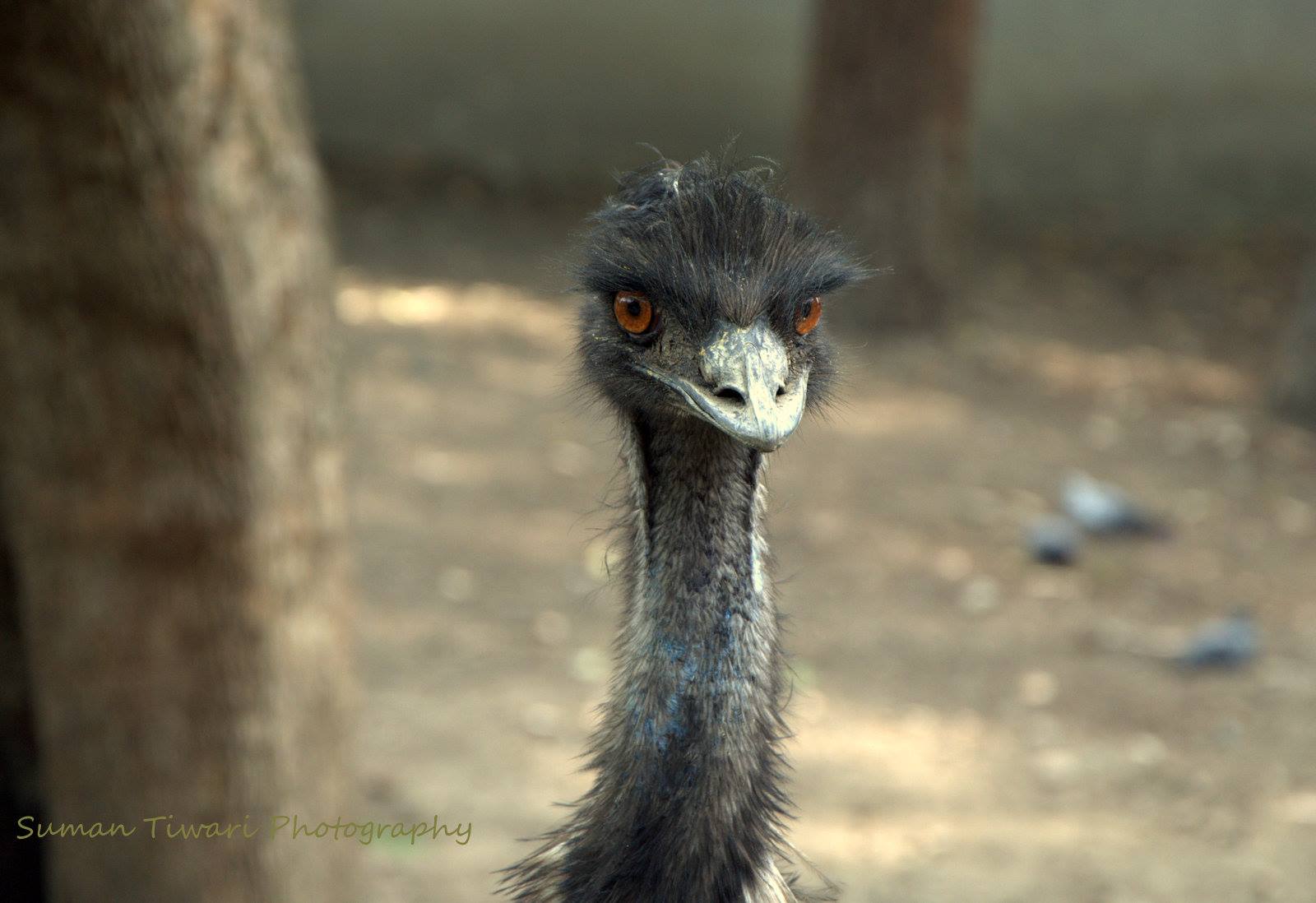 In India, states like Andhra Pradesh, Tamil Nadu, Maharashtra, Orissa, Gujarat and Punjab have sizeable population of Emu Birds (approx. 3 lakhs). Emu one egg is sold for Rs. 1000 (approx. 17 US dollar) and meat is sold for Rs. 400 to 500 per kg (approx. 8 US dollar per kg).
Emu grows at a height of 6 feet and weigh up to 80 kilograms. Newly born chic is 6 inches in height and 300 to 500 grams in weight. They have stripes on their back which fades after 3 months. The grown-up birds have long smooth feathers and two short wings. Male and female look similar except their typical sound after maturity. Males have a blue neck where else females have gray-brown colored neck. Emu can easily survive in various climatic conditions.

Leaves, Tinder grass, seeds, fruits, ajola, insects etc. are their food. Emu birds swallows small pebbles which is said to be helpful in grinding the food. They can run at speed of 50 km/hour and It can swim if necessary. Emu birds come to maturity at 18 months and has a life span up to 25 to 35 years. Emu starts laying eggs after 2 years. Morning temperature of 15 degree Celsius is good for egg production. It lays egg in India between October and February. If Winter starts early or late, egg production drops. Emu gives 12-15 eggs in first season. Emu lays approx. 25 to 35 eggs per year and this totally depends upon factors like quality of food they getting, their health and weather. Some birds are not frequent egg producer. Fat birds are considered unhealthy and they don’t lay eggs. Rate of hatching in EMU birds are around 60 to 80 percent. Interestingly, Incubation of eggs is mainly done by male bird. Male also safeguards the chicks till the time they are capable of taking care of themselves. It has been observed that when not in natural and wild environment, male birds don’t show interest in incubating the eggs and hence farmers use different kind of incubators available in markets at a price ranging from Rs. 40,000 to 4 lakhs ($650 to $6.500). Like most of birds, Emu birds too live in pair. The Pair may change but it has been observed that they stay together for at least a year.

It is advised not to mix different ages of EMU birds at once place. Adults, medium size EMU and chic’s should be keep kept separately. 120*60 feet ground is more than enough for 10 pair of EMU birds.

EMU farming future cannot be predicted as of now as market in still growing in India and very few people are aware about EMU and products made from EMU. Few companies have started investing in EMU farming and National Small Industries Corporation Ltd. (NSIC), India is an ISO 9001-2008 certified Government of India Enterprise under Ministry of Micro, Small and Medium Enterprises (MSME) which has issued few ICRA certified certificates to few EMU farm like Royal EMU farm and hatcheries of Baroda. Researchers and EMU consultants predicts that in coming days India will be major exporters of EMU’s products. 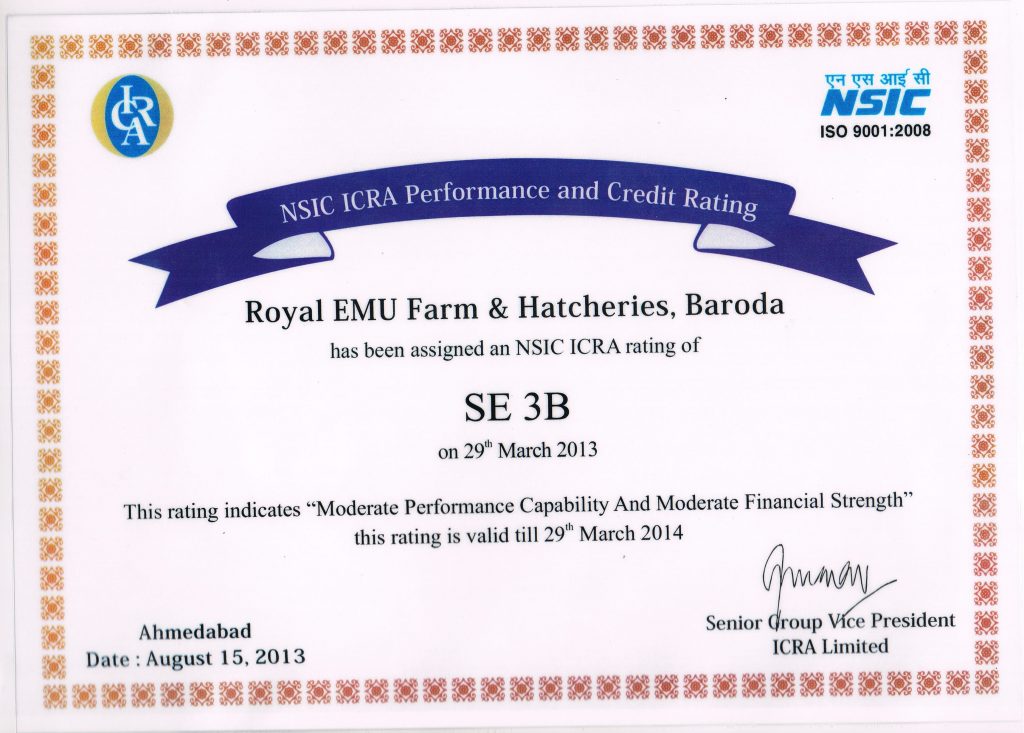